In March and April, many employers were forced to suspend planned hiring efforts due to mandated business closures. However in May, we saw signs that the economy is beginning to recover: Both workers and employers are returning in greater numbers to Jobcase. Overall, we saw nearly a 14% increase in jobs posted to Jobcase and a 5% increase in active job seekers.

While the overall trends show improvement, reviewing the data at a weekly level reveals that growth wasn’t consistent across the month of May. To assess if the decline toward the latter part of the month was due to recent civil unrest, we’ve compared a cohort of 12 of the reportedly most protested cities to all other metro areas. Our findings show that the cohort of high protest cities experienced greater declines in clicks and active job seekers, but not by much, and that most or all of the protests’ impacts to online job search have since been recovered. As expected, different cities did experience varying levels of civil unrest and protest. For example, Minneapolis, the epicenter of civil unrest, saw a more significant 8% decline in job seekers the week following George Floyd’s death.

Note: Large decline in clicks and job seekers in late March coincide with announcements of mandatory closures in many states and an increase to federal unemployment benefits per the CARES act (passed March 27th).

COVID-19 impacted both employer job availability and candidate interest in jobs. Through the initial phases of reopening, some industries have shown significant growth while others have lagged behind. Here are 5 trends revealed by our data:

The 25 largest US metropolitan areas show varying patterns of recovery as well. Overall, we see that nearly all markets increased the number of jobs available from April to May. However, only 14 of the 25 markets saw an increase in the number of clicks, suggesting a slight lag in job-seeker behavior.

In most cases, relative increases in the number of job listings in metro areas are disproportionate to the increases in clicks, suggesting that the top metro areas are, overall, becoming more competitive month over month. The most noteworthy examples are the metro areas encompassing Portland OR, Riverside CA, San Francisco CA, Seattle WA, and Detroit MI. The Miami metro area uniquely stands out with highly correlated changes in relative changes in clicks and job listings, indicating it was the market closest to experiencing a decrease in competitiveness.

Jobs within the Warehouse / Logistics / Delivery industry have followed a similar pattern in recent years: low volume in Q1, followed by an increase in Q2 and Q3 and a surge in Q4 as companies ramp hiring for the holiday season. In 2019, Warehouse job listings were relatively consistent between March and May, and job clicks increased in mid-April during a pre-summar ramp up. Over the most recent months in 2020, we’ve seen some noteworthy departures from the previously established patterns. Unlike 2019, demand for warehouse and logistics workers spiked notably in late March 2020 as consumers became wary of in-person shopping and retail stores temporarily closed due to COVID-19. April experienced a subsequent decrease in the number of warehouse jobs available, but since late April, warehouse and logistics job listings have steadily increased while job seeker interest has flatlined. This suggests increasing competitiveness in recent weeks that employers may want to consider addressing with refreshed messaging or incentives to attract needed talent. 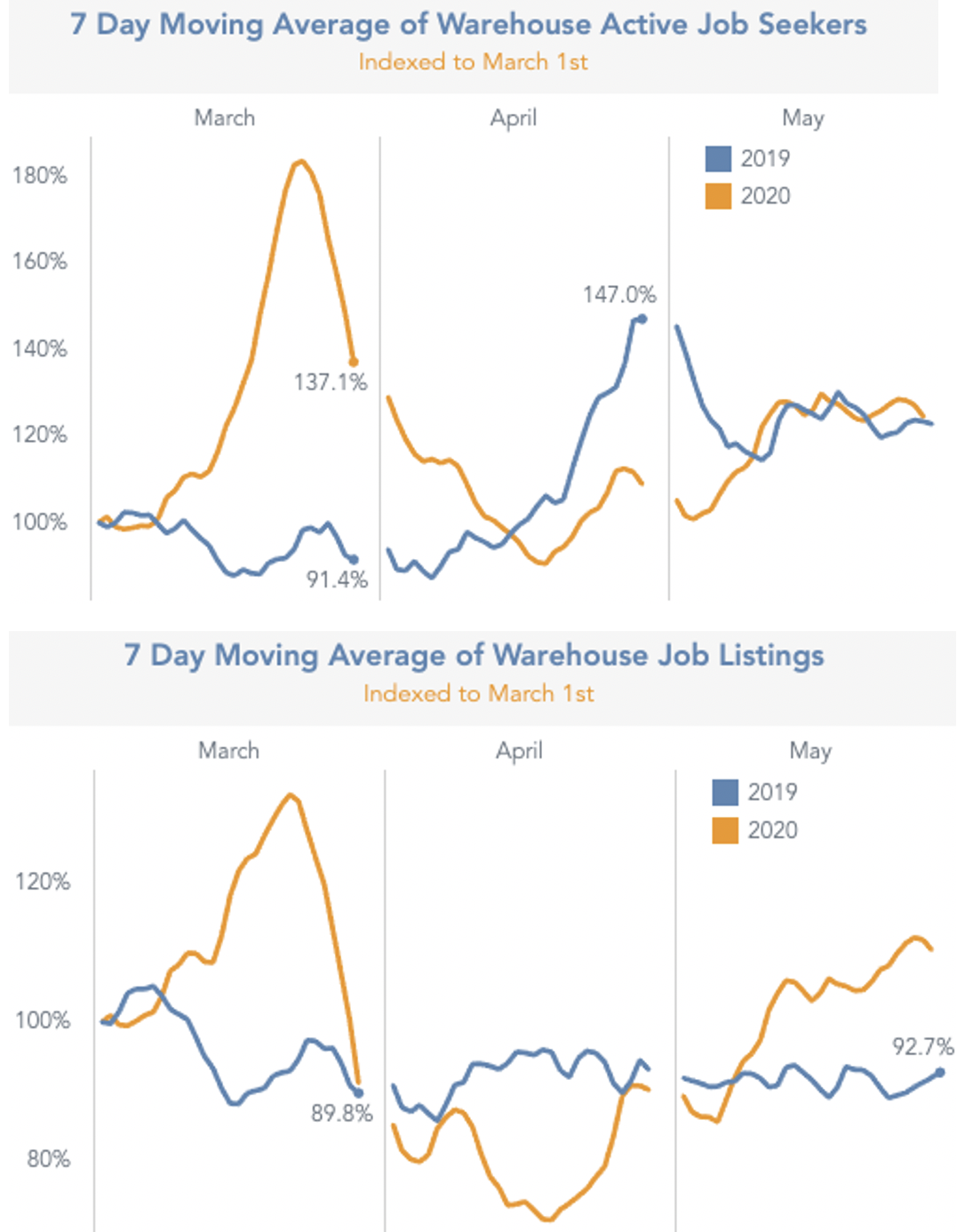