Each year as December 31 draws near, there’s one question that is the center of every lunchroom conversation:

“Do you think we’ll get an annual bonus this year?”

For newer employees or those who’ve never received a bonus before, this can cause some confusion.

“Wait, what’s a bonus exactly? How much might we get, and what’s it for?”

The truth is that annual bonuses can be a bit confusing. Sometimes they happen, sometimes they don’t. Some companies pay them. Others don’t. And the amount you get can also differ from company to company and from year to year.

So, we’re here to help break down some of the mystery surrounding annual bonuses.

In this article, you’ll learn how annual bonuses work, why companies do (or don’t) give them out, and what other kinds of bonuses exist that your company might use instead of the annual bonus.

What is an annual bonus?

An annual bonus is a one-off lump-sum payment given to employees once a year.

An annual bonus is in addition to your regular salary or wage and is typically discretionary, meaning it’s not related to performance targets or expectations.

Annual bonuses have a number of names. They are often called yearly bonuses or year-end bonuses, and because many companies give out annual bonuses at the end of the calendar year, they are sometimes referred to as Christmas or holiday bonuses.

Most annual bonuses are cash payments, though companies can provide non-monetary bonuses such as company stock or additional holiday leave.

Though annual bonuses are given fairly commonly, they are certainly not an expectation. In the U.S., for example, roughly 1/3 of businesses give out annual bonuses.

So, if you do get an annual bonus, how much should you expect?

For example, the average bonus amount for construction workers is around $5,000, while energy and mining employees receive an average cash bonus of $10,000.

How do annual bonuses work?

There are two main methods for calculating an annual employee bonus:

With a fixed sum bonus plan, employers decide on a set amount to pay out each employee. The amount isn’t tied to your current earnings, and the employer has the discretion to give different bonus amounts to different employees.

The second of the two types of bonuses is to pay employees a percentage of their salary.

For example, your employer might set the bonus percentage at 7%.

You should note that while annual bonuses are most typically given as a cash incentive, employers can also deliver bonuses in other forms.

For example, instead of paying employees a large bonus in cash, they might gift employees stock options.

Why do companies give out bonuses?

There are several reasons behind businesses giving their employees annual bonuses.

Most commonly, it’s a way of thanking their teams for the work they’ve put in during the year and the impact they’ve had on company performance.

Bonuses can also be used to incentivize individual performance throughout the year because employees know that if the company does well, they’ll receive a better bonus.

In some cases, companies don’t have a strict policy of giving annual bonuses. Instead, they reach the end of the year on a high and want to share this success with their staff.

For example, if a recruiter identifies that most companies in the same industry give employees annual bonuses, a certain company may decide to implement a similar policy so that it becomes a more attractive option to prospective employees.

In short, no, bonuses aren’t guaranteed.

Annual bonuses are discretionary, meaning they aren’t based on employee performance and aren’t included as part of your employment agreement.

It’s best to think of bonuses as a happy little extra (hence the name bonus) rather than an entitlement or expected perk.

Separate from bonuses, companies may provide additional compensation based on performance, known as incentives or commissions.

What other kinds of bonuses exist?

Let’s break down some other common types of bonuses.

On-the-spot bonuses (also known as spot bonuses) are given to individuals, teams, or entire organizations as a reward or incentive for a specific behavior or result.

For example, your employer might issue a spot bonus for an exceptional performance last month.

Spot bonuses differ from annual bonuses in that they aren’t confined to a yearly cycle, and they tend to be a smaller dollar amount.

This is the most popular form of bonus among employees. 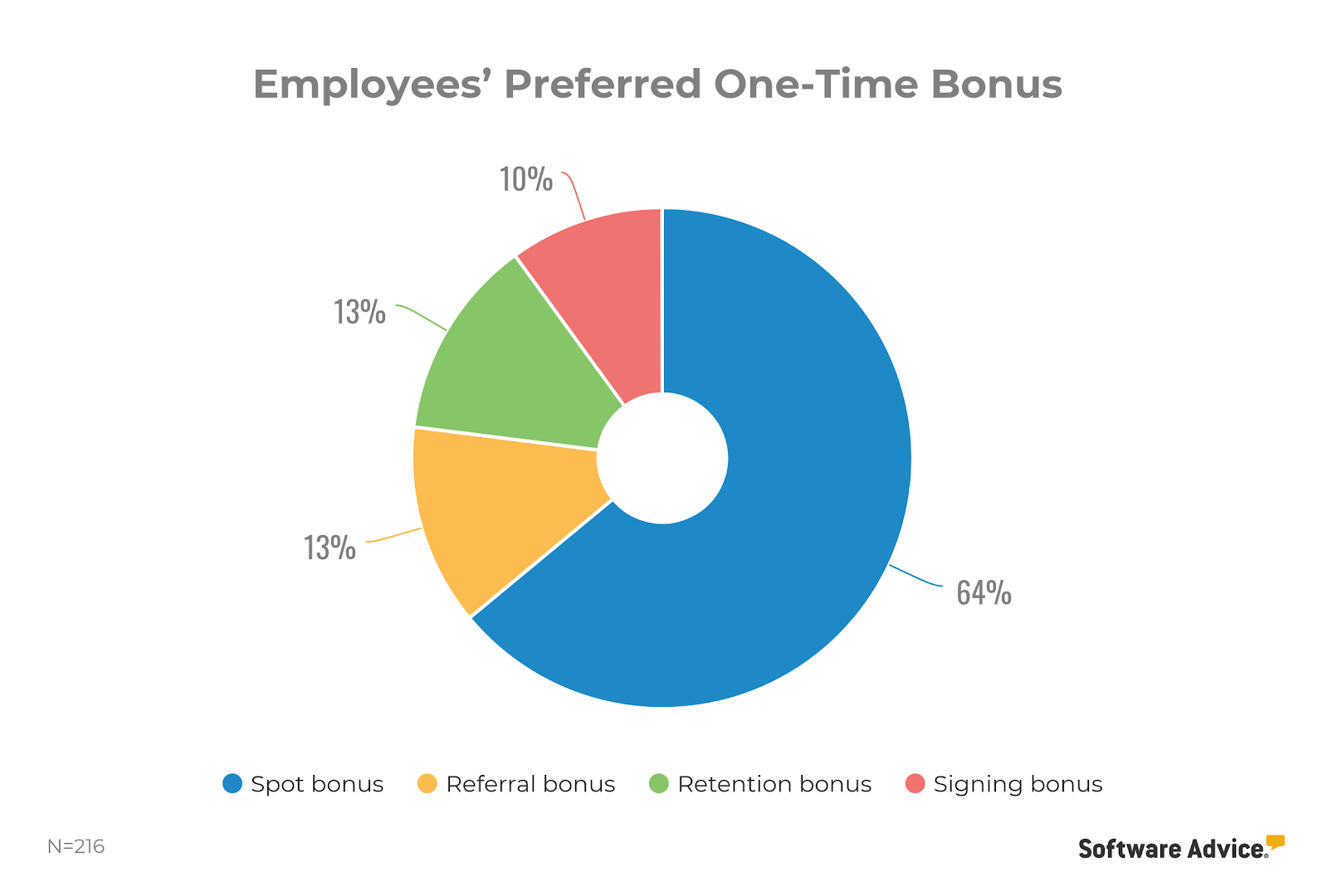 Signing bonuses are given to new employees as an incentive to join the company.

For example, if you’re interviewing for multiple jobs at different companies, one organization might offer you a cash bonus for accepting the job with them.

The average signing bonus is 10% of your salary, though this kind of bonus can be much higher in certain industries, such as tech and software industries. 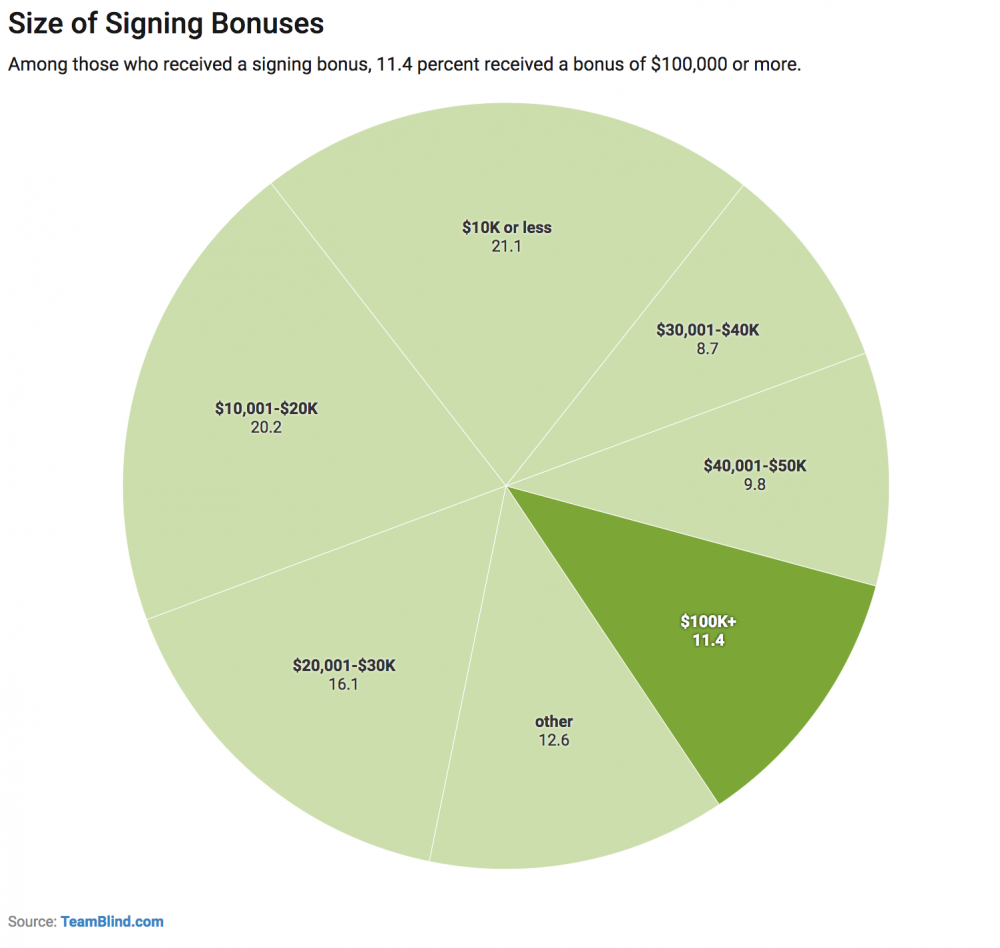 A retention bonus is a cash bonus given to employees to incentivize them to stay with the company. This kind of bonus is typically given during challenging circumstances such as a change of leadership or a company restructure.

Retention bonuses may also be given when employees are offered a new job with a higher salary elsewhere as a way of retaining that employee.

Referral bonuses are given to employees when they refer someone from their network to an open position at their company.

For example, let’s say there’s a job vacancy on another team at your company, and you know someone who you’ve worked with at a different organization in the past who would be a great fit for the job.

You refer them to your HR manager, and they end up getting the job.

This is a circumstance where your employer might give you a referral bonus.

Achievement bonuses are given as a reward for achieving a specific target or goal.

They differ from commissions or incentives in that achievement bonuses are still discretionary, one-off bonuses.

In that light, they are similar to spot bonuses, except they are more directly linked to a specific target — one that is often set in advance.

What is the difference between a bonus and commission?

Both bonuses and commissions are paid over and above your base salary or wage.

The key difference between the two types of payment is that a bonus is discretionary, meaning that the option to give a bonus (or not) is completely at the discretion of the employer.

Because of this, you can think of bonuses as gifts or rewards, either for specific behaviors or performance or simply for working at the company for the year (e.g., the annual bonus).

Commission, on the other hand, is non-discretionary, meaning there is an expectation of the payment being made, provided the employee meets whatever targets or goals that the commission is set against. 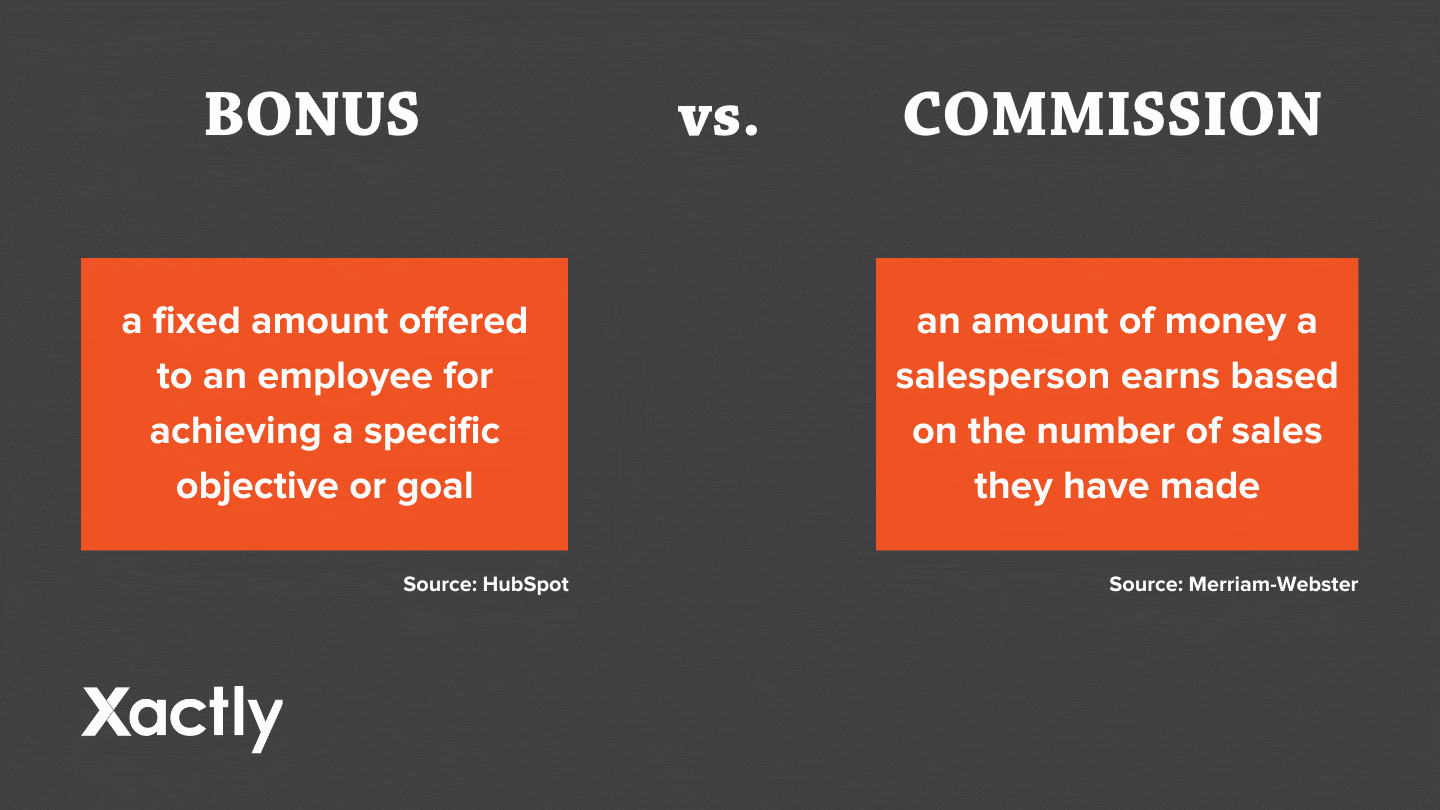 What is a typical annual bonus? 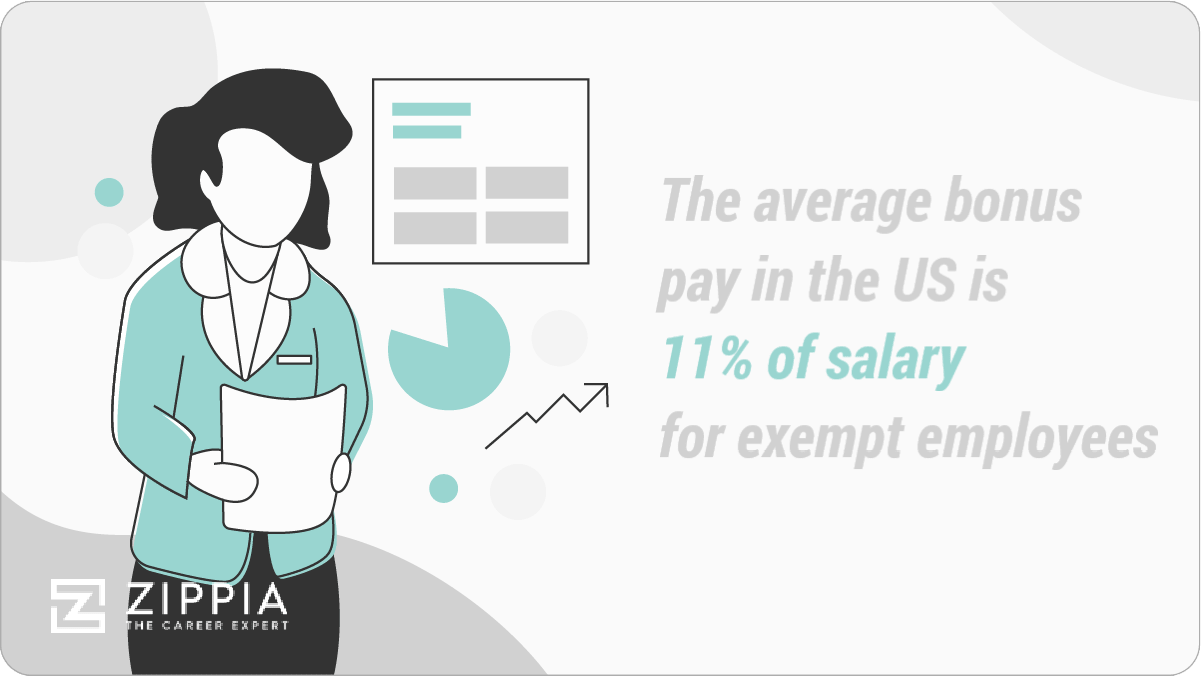 This can vary widely between industries, however, with the typical consumer goods employees earning an annual bonus that is 50% higher than the average corporate services worker.

How do I calculate my yearly bonus?

First, you need to establish what your company’s policy is for annual bonuses.

The challenge with this is that annual bonuses are discretionary, meaning companies don’t often disclose what their policy is, and the annual bonus is generally different each year.

You can use historical data to calculate an estimate, however.

For example, if you know that all employees got a 6% bonus last year, and the year before that the bonus was 8%, then it’s reasonable to assume that your annual bonus will be somewhere in that range.

You can then take the middle value (7%) as an estimate and multiply that by your salary.

However, unless your employer specifies a set amount, there is no guarantee of how much your annual bonus will be or whether you’ll receive one at all.

Does a bonus count as part of a salary?

No, your bonus is not part of your annual salary or wages.

However, bonuses are still considered income by the IRS and are taxed accordingly.

The technical term the IRS uses for bonuses is “supplemental wages,” which are taxed at a flat rate of 22%.

How do I know if my bonus is fair?

A “fair” bonus is something that’s tough to measure, as bonuses aren’t guaranteed, and “fairness” is reasonably subjective.

The best way to understand whether you’ve received a fair annual bonus is to try to understand the company’s policy toward bonuses and previous bonus amounts.

Can bonuses be negotiated?

It depends on the kind of bonus you receive.

For example, you should be able to negotiate signing bonuses when agreeing to a new position.

Spot bonuses and annual bonuses, however, are less open to negotiation.

Does your company offer annual bonuses?

As we’ve already discussed, not every company gives out annual bonuses.

In fact, the majority don’t, and so plenty of employees go their whole career without receiving an annual bonus for their year’s work.

Now that you’ve educated yourself with the ins and outs of annual bonuses, the reasons behind them, and the typical amounts you can receive, there’s one question left to answer:

Do you feel content with your current company’s annual bonus structure?

If not, it might be time to start looking for a new gig!

Check out the Jobcase job board to browse for open opportunities today.

There are no comments yet. Be the first to comment.
Add
Related Articles
Naomi Shah

Performance bonuses: How do they work?

Different ways you get paid

Sign-on bonuses: everything you need to know

Here's the scoop on finding a job with a signing bonus