Community Specialist
Follow
Cost-of-living raise: What is it, and how to ask for it?
Last updated: July 3, 2022
Sara Jones

With cost-of-living adjustments happening every year, the increase in prices can be devastating to employees who have a fixed income or are in a position where they’re not up for a major raise.

A cost-of-living raise can help these employees afford an increase in expenses due to fluctuations in the economy.

Unfortunately, not all employers offer raises automatically, making it necessary for some employees to request a raise.

This article will teach you everything you need to know about a cost-of-living raise, including what it is, how to calculate it, and how you can ask for a raise to make sure that you can pay your expenses.

What is meant by ‘cost of living’?

Cost of living is the amount of money that an individual needs to cover all their living expenses in a certain time period. It includes housing, taxes, transportation, food, healthcare, etc.

Increases in the cost of living can be paired with inflation in the economy (i.e., the general price level in an economy). The rate of inflation affects everyone that’s part of the economy, including businesses, consumers, firms, and the government.

Cost of living is an extremely important factor in building up personal wealth since a salary can provide a higher-quality lifestyle in places where rent, food, and healthcare are less expensive. The higher the cost of living, the higher the salaries employees need to survive.

The cost of living differs depending on where you live in the U.S. For example, the cost of rent and food is usually higher in cities than it is in more rural areas.

Consider the cost-of-living index for the U.S. The average cost of living is represented by 100, meaning that any state that has a number above 100 is more expensive than the U.S. average, and any number below 100 is less expensive.

The image below shows the cost-of-living index for New York. As the overall cost of living in New York is 120.5, this means that it’s far more expensive to live in New York than the U.S. average. 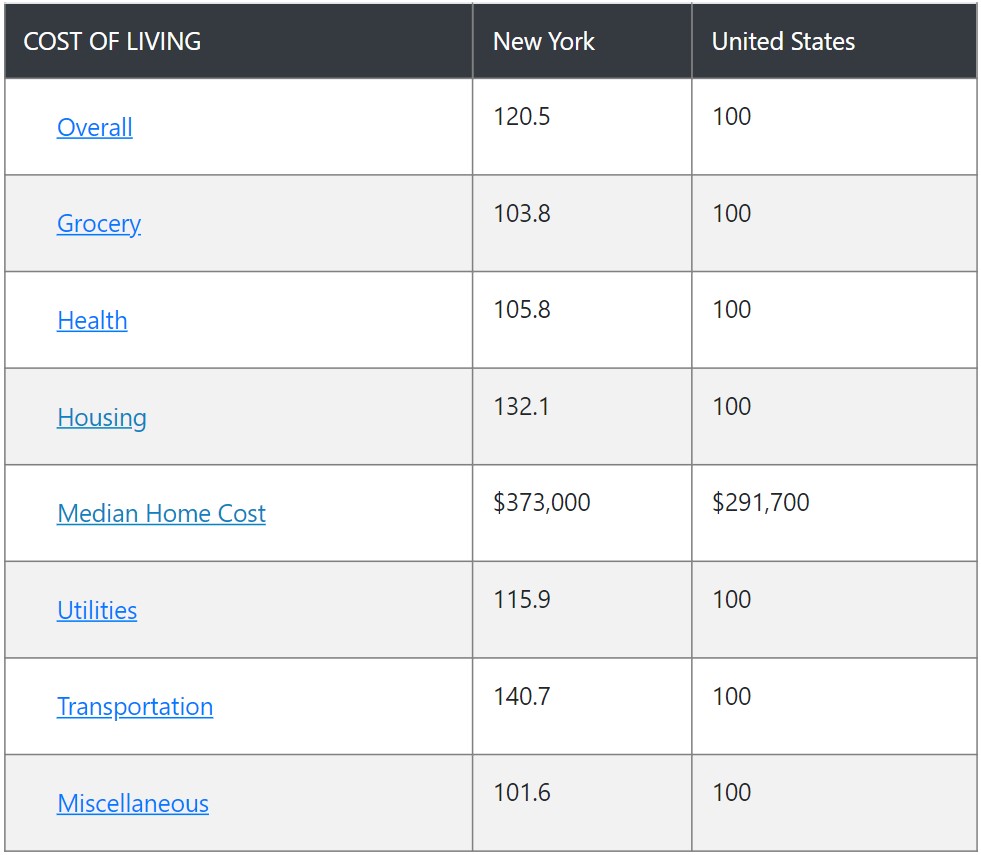 The cost of living becomes higher due to inflation. In fact, in October 2021, prices in the U.S. had increased by 6.2% compared to October 2020.

The COVID-19 pandemic also had a huge impact on the cost of living, with food prices increasing due to less production and an increase in demand due to panic buying.

What is a cost-of-living raise?

The goal of a COLA is to keep the buying power (also known as purchasing power) of an employee's salary the same during times of inflation. Without COLA increases, the declining value of the dollar leaves consumers with less money to spend in their pockets.

The raise is most often given in terms of salaries, wages, and benefits, which can be implemented by businesses and the government.

The most common instance of cost-of-living adjustments is the increase in Social Security benefits the government applies yearly.

If employees are part of a labor union such as Teamsters, United Auto Workers, or Service Employees International Union, then the union might negotiate a cost-of-living adjustment for them.

Some employers may incorporate a cost-of-living raise in their compensation plans to accommodate for the yearly increase in the cost of living. However, many companies base their raises in compensation on employee performance rather than the increase in living costs.

So, employees may be left with low increases that can’t cover their living expenses.

How does a cost-of-living raise work?

In the U.S., the cost-of-living adjustment is mostly determined based on the Consumer Price Index (CPI). The CPI is an approximation of how much someone needs to spend to obtain a certain level of well-being.

It’s a measurement done by economists for tracking changes in the annual cost of a typical “basket” of goods and services that urban consumers buy.

The Bureau of Labor Statistics (BLS), which put together the CPI, bases its measurement on a standard sample of urban wage earners and clerical workers. This is known as the CPI-W.

While the cost of living tends to increase every year, there are some specific circumstances outside of an annual raise in which cost-of-living raises apply.

Some employees may negotiate for a cost-of-living increase if they’re transferred to a new city while still working for the same company.

For example, say an employee is asked to transfer from Kentucky to New York, where the cost of living is far higher. To maintain the same quality of life the employee needs a higher salary upon moving there.

Some of the most expensive places to live in the world include Switzerland, Hong Kong, Iceland, the Bahamas, and others. 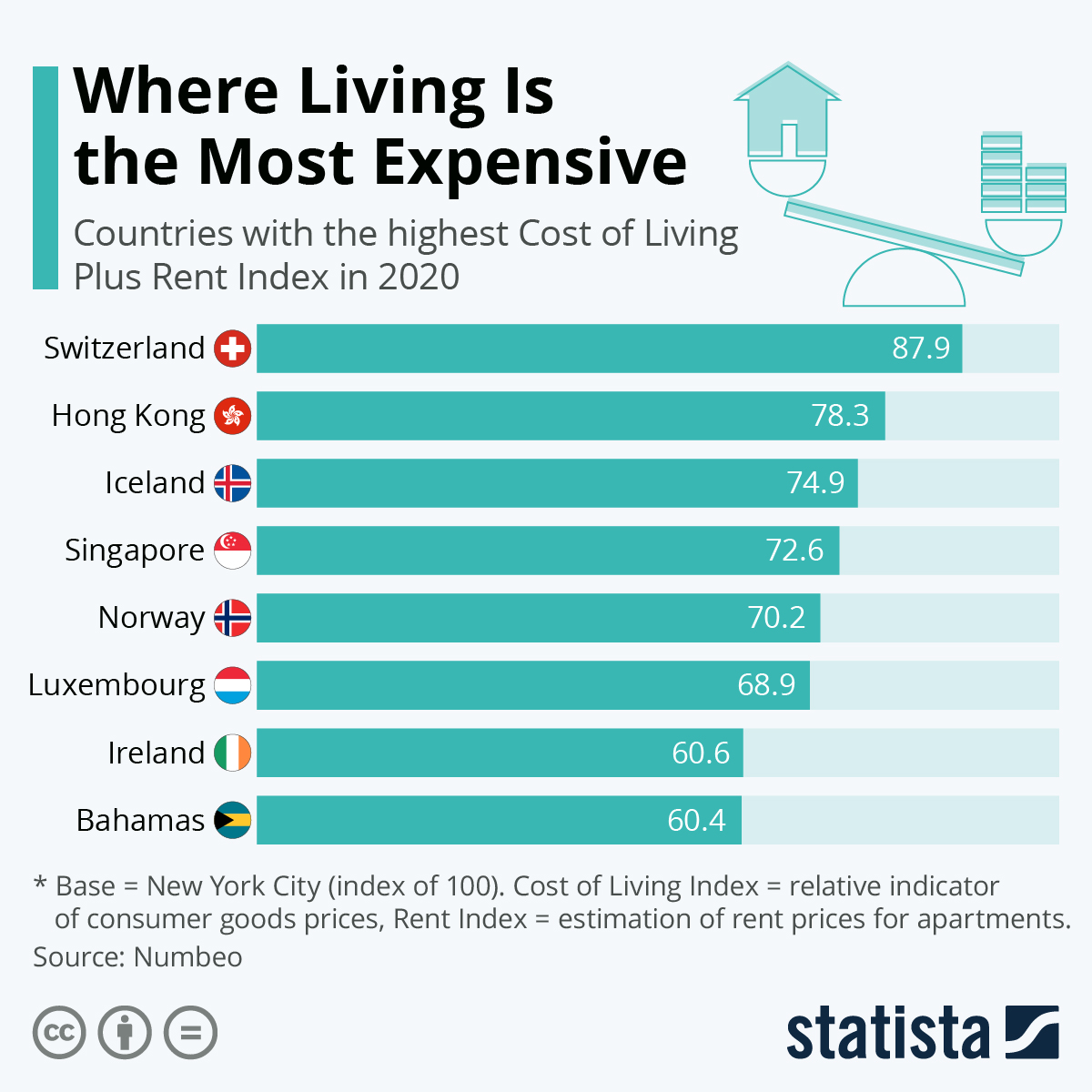 Employers and employees can use the cost-of-living index of different states to determine whether a salary offer is suitable for a new job in a different location.

Find out where to find hourly work in high cost-of-living cities.

Retirees who live on a fixed income also benefit from cost-of-living adjustments.

Over time, inflation leads retirement investments and savings to decrease in value. As a result, retirees who might have been living comfortably at the beginning of their retirement may struggle to make ends meet as the years go by.

For this reason, some COLA-based pension plans and Social Security Administration retirement benefits factor the cost of living into retirement income.

How are cost-of-living adjustments calculated?

Cost-of-living raises should reflect increases in living expenses. Many factors affect a person’s cost of living, including:

With a cost-of-living raise, when the prices of these elements increase or decrease, an employee’s salary changes. With the cost of living growing each year, employees’ paychecks need to be higher so that it can cover their expenses.

As mentioned above, the cost of living is typically calculated based on the Consumer Price Index (CPI).

The BLS calculates the CPI by taking the average weighted cost of a basket of goods in a specific month/year and dividing it by the cost of that same basket in the previous month/year. This shows the annual increase in prices.

After looking at the CPI, employers can see how much of a raise they need to give their employees to cover the cost of living.

Which employers are more likely to offer a cost-of-living raise?

Most non-profit, corporate, and military employees will get a cost-of-living raise. Certain state laws also require COLA as part of state employee contracts — making it mandatory for government employees to get a raise.

However, private employers aren’t required to give cost-of-living raises to their employees. This has led to a huge difference between the wage increases of public workers vs. private workers.

That being said, a lot of private employers will still give their employees cost-of-living raises since it increases retention rates. It also creates a far more positive work environment and culture.

Whether employers choose to give cost-of-living raises or not, they’re still required to pay at least the minimum wage. Employers are also often expected to pay workers for any overtime that they work.

How to ask for a cost-of-living raise

If your employer doesn’t offer cost-of-living raises, you can either ask for a raise or switch to a company that offers COLA.

Since hiring new employees can be extremely expensive, employers are often willing to give employees a raise since it’s more cost-effective than finding someone to replace them. Sometimes, all they need is a little bit of a push. 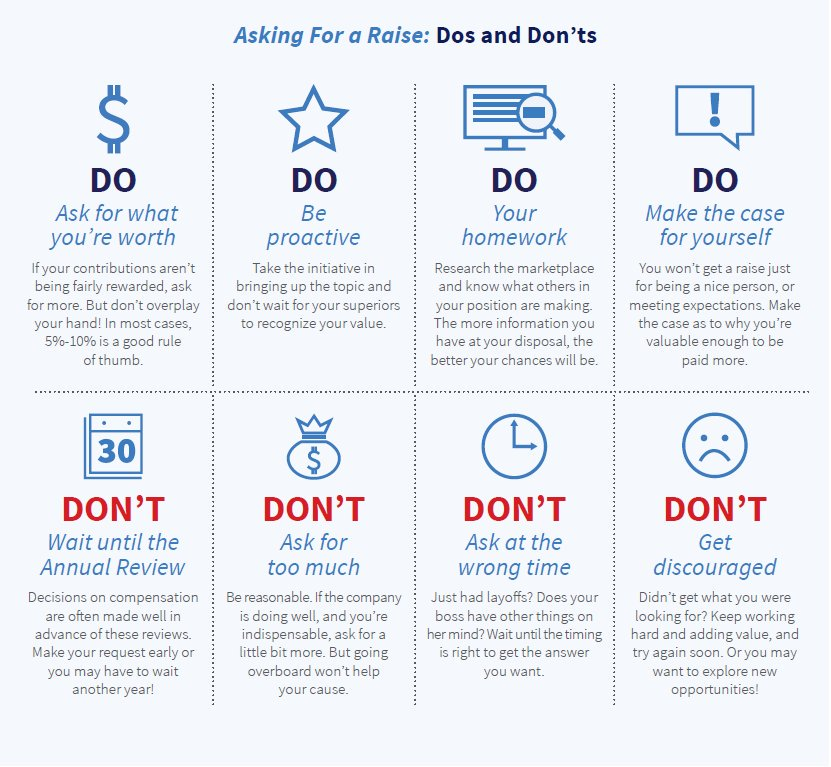 Here are the steps you can take to request a cost-of-living raise:

When asking for a raise, you need to choose your timing carefully. Ask yourself the following questions to identify which time is best to ask for a raise:

If your manager is under a lot of stress and pressure at work, it might not be the right time to ask them for a raise. By paying attention to their workload and moods, you’ll be able to identify a good time to catch them in a conversation.

What is the financial situation of the company?

If the company you’re working for isn’t doing well, it’s not a good time to ask for a raise. If you don’t know the financial health of the company, you can look for signs such as layoffs or cutbacks in spending. Check the news for updates on your employer or industry.

If you see that your company isn’t doing well financially, it may be better to consider looking for another job at a different company that will be able to pay you more.

If you don’t know how much of a raise you need to ask for, you can do one of two things:

Compare your expenses with your salary to determine the percentage increase you need to be able to cover those expenses.

By learning about the trend of your job title and city, you’ll have a foundation to base your raise expectations on, which may make it easier to convince your manager to give you a raise.

Remember to consider your qualifications and years of experience to make your request even more convincing.

Step 3: Set up a meeting and prepare

It’s far better to ask for a raise in person rather than over the phone or via email. If you’re not in the same location as your manager, you can arrange a video meeting with them.

Ask your manager which day suits them best and schedule a meeting on your calendar. However, remember to give yourself enough time to prepare.

Here are some things to consider when preparing for your meeting:

Practice what you’re going to say before your meeting. This way, even if you’re nervous, you’ll be able to stick to your script. Remember to focus on professional reasons instead of personal reasons when asking for a raise.

Ask your manager for the specific salary figure you’re looking for. Cite the research and/or calculations that you’ve done to arrive at that specific number. Give reasons why you believe you deserve the raise by showing how you’ve added value to the company.

For example, if you’re a salesperson, give figures regarding the number of sales that you’ve brought in for the company.

Your manager might not agree to give you a raise then and there. They’ll likely want to speak to the executive team or the owner of the company.

Write a thank-you note or email that also lays out what you asked for in the meeting. This may help the manager to remember your request and the specifics you asked for.

You’ve seen what a cost-of-living raise is and how to calculate it. If rising prices result in your expenses outweighing your income, you need to request a raise by following the steps outlined above.

If a cost-of-living raise isn’t something your employer can offer you, you can look for another job that suits your needs.

This is a very long way to say "just ask".

This is a very long way to say "just ask".

8 different reasons for a pay raise

$15 minimum wage debate: what to know

Everything you want to know about tuition reimbursement

Am I underpaid (and what should I do about it)?

Your guide to retirement plans

Prepare yourself to ask for help: part 1